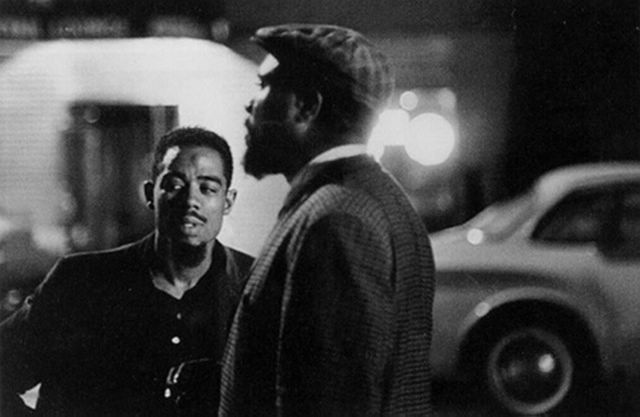 san juan hill was so named in part because several black veterans of the spanish-american war settled in the area. (san juan hill, near santiago, cuba, was the site where the legendary black cavalry known as the buffalo soldiers, alongside teddy roosevelt and his rough riders, waged their most ferocious battle.) but the name stuck to the neighborhood for another reason: its reputation for violence. legend has it that the name was first used by an on-looker who saw the policemen charging up during one of the once common race fights. between 1900 and 1917, the place was famous for its race riots. in 1905, a reporter noted that the police in the vicinity 'expect at least one small riot on the hill or in the gut [the west end side of san juan hill] each week.'
in 1917, a day after the fourth of july, san juan hill erupted once again when a group of black national guardsmen, all members of the fifteenth infantry of new york, ignored police orders to disperse. they had committed no crime, but apparently the sight of twenty-five black men in uniform gathered on the corner of west 61st street was enough to arouse suspicion. fighting began when one of the white police officers arrested lawrence joaquin, a black puerto rican guardsman who, coincidentally had been arrested in the racial disturbances a month earlier. his comrades fought back in order to free joaquin. as soon as whites on amsterdam ave. heard or saw what was happening, they came pouring out of their homes, initiating another massive melee.
a few months later, the fifteenth infantry was dispatched to the war front, where they were reorganized as the 369th infantry regiment under french command. earning the nickname 'harlem hellfighters' for their combat record, the regiment's astouning band, led by lieutenant james reese europe, introduced ragtime and early jazz to europeans.

the combination of anti-black violence, police inaction during the 1905 riots, and deteriorating housing conditions spurred a mass exodus out of san juan hill into the next up-and-coming black neighborhood: harlem.
san juan hill's reputation as a violent community was as strong as ever by the time the monks settled there. about a year and a half after they arrived, san huan hill earned the dubious distinction of being one of the 'busiest crime areas in the new york city'.
robin d. g. kelley, thelonious monk. the life and times of an american original, ny 2009.