what your racism is good for... 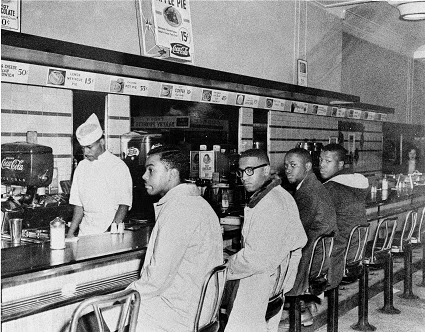 a photo of a 1960 lunch counter sit-in at a Woolworth’s in Greensboro, NC
protesting the exclusion of black customers from this "whites only" restaurant

"I thought that racism was about believing that another race is inferior. Like most people I got (slightly) wiser with age and eventually figured out that racism is about keeping someone else beneath you on the social ladder… If you actually thought black people were dirty savages you wouldn’t eat anything they handed you. But of course it has nothing to do with that. You’re fine being served food because servility implies social inferiority. And you don’t want to sit next to them simply because it implies equality."

"Hate may be useful for justifying inequality, but at its root it’s about power and resources, not emotions."

where i got this one from...