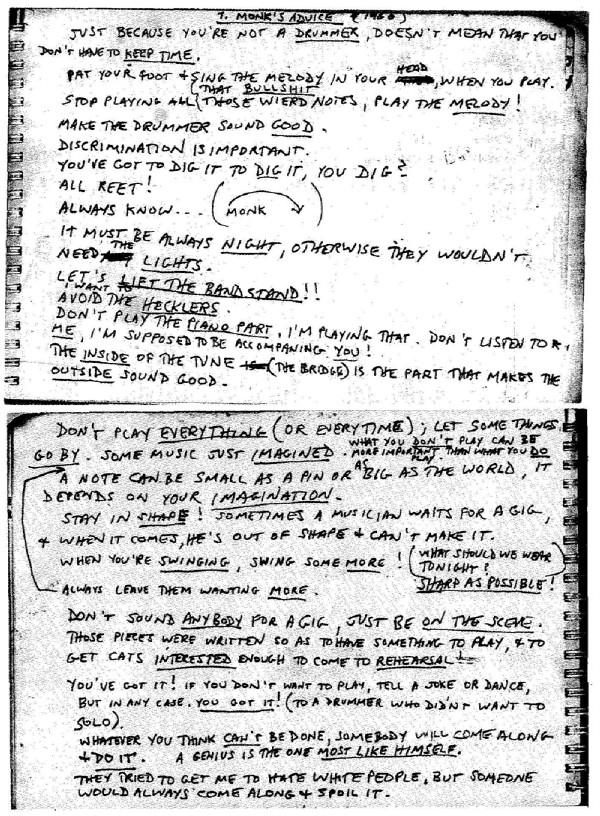 'his favourite spot for thinking and talking about music was the basement at minton's, a small, diamond-shaped room with low ceilings, whicht teddy hill eventually turned into a separate after-hours club. monk used the space to practice with other young musicians and rehearse various bands he tried to put together. it was here that he, dizzy gillespie, kenny clarke, and others worked out chord substitutions, alternative voicings, and harmonic devices that could "modernize" swing music. in particular, monk preferred descending chromatic chord progressions and dissonant, "open-voiced" chords made up of just the root and the seventh or ninth degree of the scale. his chords often elicited chuckles from the audience, but monk didn't mind. he later remarked, "anything that's very good will make you laugh in admiration, so it must be humor to make you laugh - or maybe it makes you laugh in surprise because it knocks you out."


'monk's distinct sound was a product of unceasing discipline, practice, and hard work. achieving the harmonic and rhythmic language recognized as monk's did not come easy to him - playing "straight" was easier than playing "monk".'
'bebop's detractors, monk argued, "don't  understand the music and in most cases never heard it. "weird" means something you never heard before. it's weird until people get around to it. then it ceases to be weird."

'bassist ray brown complained that monk never really "comped" properly behind [dizzy gillespie's] band, choosing to do his own thing. sometimes he sat at the piano motionless and did nothing until he felt the time was right: "most piano players in most big bands sit down and they play with the band, you know. but monk would just sit there like this. and all of a sudden there'd be a pause from all the trumpets and everything, and monk would go 'plink!' like that. and everybody would go 'yeah!'"
robin d. g. kelley, thelonious monk. the life and times of an american original, ny 2009.